We (mostly) try to avoid boasting and to let our app do the talking.

But occasionally we need to break that rule. Today is such a day. 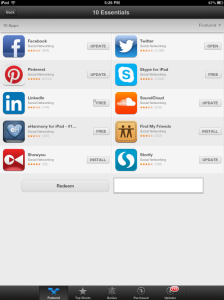 We were just as excited to see Showyou featured prominently in the Social Networking category on the iPhone AppStore (along with Facebook, Twitter, Foursquare and LinkedIn).

It’s incredible group of peers, we’re honored to be listed with them. But there’s much more to come. Stay tuned.

UPDATE: Showyou 3.4.4 is now live in the AppStore. Thanks for your patience.

We also completely re-worked our sign-on process, to make it easier to sign-in with your email address and to make the process even more secure.

But, in doing that, we inadvertently introduced a couple of new bugs. The really bad bug: People who are still on iOS5 will find they can’t open the app at all. And, some of you may find that after force-quitting the app you may get logged out and have to re-signin with your Twitter or Facebook account.

We have a fix uploaded to Apple, and we hope to have that deployed today, or at latest, tomorrow.

We’re really sorry about this. Thanks for your patience.